If I was to explain Zeno's paradoxes to a layperson, I'd start with the Zeno's Flat Screen TV Paradox. It is very practical: most have firsthand experience in real-life application of this deeply philosophical problem each time we shop for something. 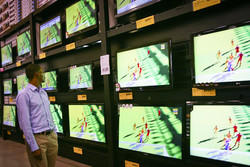 That's just too much choice! (pic taken here). Thankfully, ancient Greek philosophers are to the rescue.

Zeno's Flat Screen TV paradox states that the only rational choice would be to buy a 50'' TV. Here's the proof.

Well, 25 bucks isn't that much. It's like a half tank of gas, two cinema tickets, or a cab ride across the city. For that price, you permanently get one inch of screen diagonal! Only a fool wouldn't agree. You seal the deal, the salesman takes your old TV, and installs a new one, and you enjoy your 31 inch LED flat screen.

A moment later, a salesman knocks onto your door and asks if you'd like to increase a diagonal of your TV for 1 inch at only a $25 price. This is as good of a deal as the previous one, Even better: as the diagonal length increases, you get more screen space per inch for the same price! You seal the deal, and get a 32 inch TV. But before you even install it, a salesman knocks onto your door with a great offer...

Note that it's sensible to manufacture smaller TVs in smaller quantities, because the comparison with a smaller screen is the gist of the paradox. Meanwhile, people have been buying 30'' televisions over and over, while this is completely irrational! And that's the Zeno's Flatscreen TV Paradox.