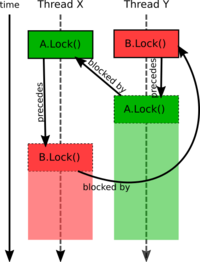 Translucent areas depict waiting for something; incomplete lock statements have dashed border. Note that it doesn't matter in which order the top two acquisitions are made.

Can a cryptic entanglement of your mutex locks lead to a deadlock? It sure can. Deadlocking is the second thing your parents tell you about mutexes: if one thread acquires A, then acquires B before releasing A, and the other does the same in the reverse order, the threads may potentially deadlock. And deadlock they will if the first two acquisitions are picked from separate threads. Here's the code of two threads, and sidenote depicts the problematic execution:

But what about Reader/writer locks also known as "shared/exclusive" locks? Let's recap what these are first. Sometimes, to achieve greater efficiency, a mutex implementation supports two flavors of locking: Reader and Writer (otherwise known as "shared" and "exclusive"). If several threads only want to read from a shared variable, there's no need for each of them to wait for others. That's where you'd use a ReaderLock operation on a mutex guarding the variable. If thread wants to write, it invokes WriterLock which means "do not run any readers of writers while I'm holding the lock". Here's a wiki entry for reference, and here's standard Java API. 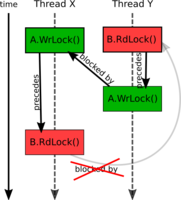 We no longer have a "must-before" relation between B locks in two threads, so they don't deadlock. This looks OK, but it actually is not!

So imagine that both threads X and Y happen to use one of the locks as Reader lock? It seemingly should prevent deadlocking: if, say, B is a reader lock, then the execution specified above will make progress: B.ReaderLock() in thread X will not block waiting for thread Y to release it... right? Here's the code for clarity:

Turns out, reader locks can deadlock. You just need to make reader lock wait for another reader lock's release; how?

Many mutual exclusion implementations make acquiring threads "form a line" of some sort to ensure fairness: no thread should wait forever for a lock. Then a threads that tries to acquire a lock--either shared or exclusive--waits until all threads that called L.WrLock() earlier exit their critical sections. Fairness is especially important when you have reader and writer locks: if you'd allow any reader lock to proceed while there is another reader holding the lock, your writers could "starve" waiting for quiescence among readers, which may never happen on a highly contended lock.

So, to make a reader lock wait on another reader lock, we need a writer lock between them. 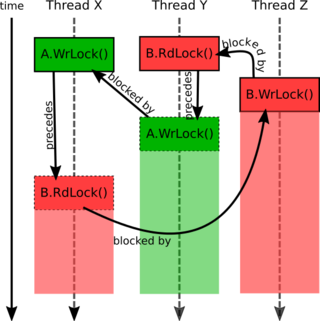 Here's how three threads can interleave such that you have a deadlock between reader mutex locks. The "blocked by" relationship between these reader locks transitively hops over a writer lock in some other thread Z.

Assume, that in the execution described earlier, before Thread X attempts to acquire the reader lock B, thread Z chips in, invokes B.WrLock(), and only then X calls B.RdLock(). The second X's Y.RdLock() starts to wait for the Z to acquire and then release B because of fairness concerns discussed above. Z's B.WrLock() waits for Y to release B.RdLock(). Y waits for X to release A. No thread makes progress, and here's the deadlock. Here's sample code of all three threads:

Note that you will have at least one writer lock for B somewhere (because if all acquisitions are Reader Locks, there's no point in having the lock at all.) Therefore, the only way to prevent this kind of deadlock is to not distinguish reader and writer locks when reasoning about progress guarantees.

This kind of deadlock needs at least three threads in order to bite you, but don't dismiss it outright! If the Internet taught us that a million monkeys in front of typewriters will not eventually recreate all the body of Shakespeare's work. they would at least trigger all possible race conditions in our typewriters no matter how contrived the corresponding executions seem.