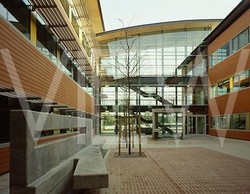 This is a photo of a Microsoft office (stolen from here), namely, the Roger Needham Building in the University of Cambridge, one of two buildings the Microsoft Research resides in. See how many Windows it features? It just couldn't be a coincidence...

Lately, I visited Microsoft Research PhD Summer School 2011 in Cambridge, Great Britain. The event has been organized by Microsoft for more than ten years. Researchers from all the institutes over the Europe that are partners of Microsoft Research (don't know what it means, but apparently the institute I work at is one of them) come there to learn something new about researching in general, to meet researches who work at Microsoft, and to get introduced to what Microsoft is interested in.

The event was mostly held in Roger Needham Building, where, as far as I know, most of the Microsoft Researchers in Cambridge nest. I haven't been given a chance to take a tour over, but it was obvious that this Microsoft Office really has a lot of Windows on purpose ;-)

Microsoft also blogged about the event, but here I'll share my personalized view. 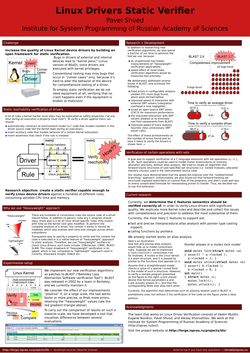 That's how my poster looked like; check out the Tux at the upper-left corner! I know it's a total crap (there's just too much text), but this was my first experience, and the next time I'll do it right... or, at least, more right than this time. Yes, next time I will not use LaTeX for making a poster. (And here is the pdf).

As a part of the obligatory participation program, I made a poster presentation on the research I'm currently doing. Of course, I couldn't miss the chance to troll Microsoft with an image of penguin Tux, the mascot of Linux, and with a title that starts with "Linux" as well (see sidenote).

It turned out that Microsoft researchers are really open-minded; they didn't get xenophobic, they joked on this matter, and some of them even confessed that they sometimes even use Linux in their work.

Of course, the most of the school, though, was devoted to introductory "breadth-first" talks on what Microsoft is doing. The talks were made by practicing Microsoft researchers, and I'll briefly overview the ones that seemed the most insightful to me.

Simon Peyton Jones who is known for his work on Glasgow Haskell Compiler, gave an excellent talk on how to make excellent talks at a research conference. Not about GHC, though, which, probably, could be more interesting.

One of his observations, which I also noticed a couple of conferences ago, was that it's easy to be just good enough because most talks on an average research conference are really boring.

He also made a talk on how to write a good research paper, but it went beyond that, and Simon shared his view on how to interweave presentation into the research. He advised to start writing a paper at a very early stage, starting from the "middle", the "core" of the paper. This would help you to shape your thoughts, and to understand what your research is actually about better, he said. However, some people reported that this recipe may be not universal, as it (luckily?) fits the way Microsoft evaluates their employees.

Another good insight was about about some techniques of how to present a research made. I learned that the approach to presentation of our scientific results we've been taught here, in Russia, is not the only one possible. The key difference with what Simon explained is the fundamental motivation why the research has been done. I have always been taught that in each and every paper I should justify my research with how bad, wrong and suboptimal the results previously discovered were, and here I come, with my research has the sole purpose to improve over them. Simon has introduced another approach. The key motivation for the research, in his opinion, was, "look, I've created something new! Isn't it cool? Look, how efficiently it works! And, by the way, foo and bar have also been discovered, and I sincerely thank their authors for they have inspired me".

Of course, it's hard to tell that one of them is the right way to go. However, I consider papers written the second way much more pleasant both to read and to write. 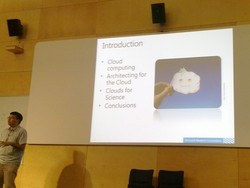 Kenji Takeda gave an overview of what Microsoft is doing in clouds. Aside from flying here and there on planes, Microsoft also builds datacenters, both at software and at hardware level. I learned that an interesting solution was developed for cooling datacenters. Instead of installing fans that just move the air away, simple physical observation could be used to improve over such an inefficient and sometimes failing solution as mechanical fans. The idea is to utilize the phenomenon that the hot air is lighter, and moves up. If the upper part of a large room is open, the hot air is removed from there, thus creating the draught that sucks the cold air in from the holes in the bottom.

After the lecture, we had a brief discussion of how to manage utilization of the cloud resources at peaks of the demand, when there's just no enough power to serve all the requests per minute, such as on Christmas. The answer was that it may be achieved by raising the price at certain periods. Indeed, if we are running a scientific computation (such as genome sequencing), it can be safely paused for Christmas, whereas large shops or entertainment information providers may take the resources instead. Raising price is the way to make it self-manage, driven by reducing expenses and maximizing income for all the parties involved.

As a side-effect, it may turn out that some non-commercial services that utilize cloud computing services, such as my website, may also get temporarily shut down—just as a ground shop would be closed on holiday. So "this website is closed for Christmas" is not a distant future for us.

Biology and Ecology, and... Microsoft?

This is how computer simulation in biology is portrayed in the "Hollow Man" sci-fi movie by Paul Verhoeven. As far as I know, Paul used to be a researcher, and really tried to make it look real. But you may notice that the protagonist is running a simulation of a molecule he designed, and it's not model checking: the science was not that advanced at the time of shooting.

Turns out that Microsoft really carries out a lot of research. For instance, heard a talk about fighting cancer with model checking, which was created with help of Thomas Henzinger, a well-known scientist among software verification specialists. Model checking helps us to fight cancer by discovering and verifying models of internal chemical processes in human cell—without simulations or actual experiment. These models, shaped as finite state machines, are first verified by computers, and if the automaton found is proven sane, the real experiment is carried out to confirm the relevance of the model.

I've seen something like this in the "Hollow Man" sci-fi movie, but it turned out to be the reality of a Microsoft Research laboratory! And even more, while the Hollow Man ran simulations (see sidenote), model checking techniques do not require even a model of the experiment: the assumptions about the nature of the processes being studied are verified as a mathematical abstraction instead of as a physical object, thus providing more reliable result.

Another interesting domain is ecological research. Microsoft gathers and works on providing representation of a lot of ecology-related data. Drew, a researcher from Microsoft, also shared that humanity starts experiencing difficulties with water! He said, that today we literally have to mine water as deep as hundreds of meters. And some of the drink water sources are actually getting exhausted: you have to dig deeper and deeper to get to the actual water!.. However, I'm not an ecologist, so that was just an idle curiosity there.

Anthony Hoare and yet another philosophy lecture

Sir Anthony gave a boring talk about the history of computer science projected on the development of philosophy. Ever since the times when I was visiting philosophy lectures, which were obligatory for my postgraduate studies, dozing off became an instant reaction to the history of philosophy.

I couldn't miss the chance to ask a couple of questions to such a well-known person. I, actually, had one prepared. Several months before, I heard a talk on some applications of model checking. Irina Shevtsova advocated the use of models in software verification. Roughly speaking, she insisted that a program should come with additional information to verify its correctness. Ascribing this to Hoare, she explained that the auxiliary information should be a model, a finite-state machine to depict a programmer's—or a customer's—intent. This sounded too controversial to me, but the moderator of the seminar shot my attempts to start a discussion on that matter.

So, I asked Mr. Hoare whether it was really what he meant. It turned out that it indeed was not the model what Hoare was talking about, but mere assertions. Any assertion you put becomes a piece of meta-information on what the correct behavior of the program is. The non-violation of these assertions can be automatically, or, at least, manually, verified, and the stringent adherence of any execution to all the assertions is what makes a program complying to the developer's intent. Can't wait for another encounter with Irina, where I'll have a chance to explain (oh, let's be honest, to brag about) this misunderstanding.

Byron Cook gave an awesome talk on termination checking techniques. This is not about the extinction of the humanity by machines (well, if it is, then just indirectly), but about automatically proving that a given program will terminate. I was aware about the techniques of proving that a program will never violate a given property while running (this is called "safety property"), and I even maintain a tool that performs such a verification. However, the details of proving termination (that the program will not get stuck in an infinite loop) somehow remained being not learned by me. Byron has filled this gap with his awesome talk. I won't try to explain it briefly, and will redirect you to the article in CACM he co-authored (or, judging by his talk, made the biggest contribution to). 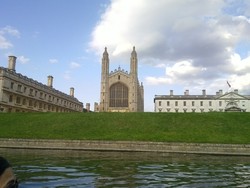 This is, perhaps, the most well-known view of Cambridge—shot on my own camera! At the time of making this picture, I was on a boad being punted, the even having been kindly organized by Microsoft Research.

The event location was Cambridge, a beautiful village an hour of a train ride away from London. We quickly got used to a mild smell of potassium the town greeted us with, and the remaining dominant flavor of science encouraged the dissemination of the knowledge at the school.

We couldn't help walking through all the Cambridge at our free time, including, but not limited to several pubs (authentic English ale is awesome!) But the details of the trip are really off-topic here; what I can safely share is that if you get to England, it's totally worth it to spend a day taking a tour over Cambridge.

What was most valuable to me personally in this School is the breadth. I learned a few about a lot, and that's how you really enjoy getting new knowledge. I met one person who worked in a similar domain (and I missed a change to have a good discussion with another guy—jeez, I should really learn how to approach people!), and had an interesting discussion with him. I learned something new about how to present my research well, and... Well, I learned that Microsoft is not that evil! Isn't this what the organizers hoped for in the first place?..