At my previous job in a research laboratory, I was improving a Static Analysis tool named BLAST. The name abbreviates its origin, and is decomposed as "Berkeley Lazy Automation Software Verification Tool."

By the way, my former peers have prepared a nice comparison of Static versus Dynamic analysis for the Linux Kernel.

Of course, it can't actually solve it (nothing can). What it can is to prove that a line is never reachable for a certain fraction of programs. A much more useful purpose is to find bugs. For instance, if we want to check a null pointer dereferences, then we could insert checks like this:

And it does find such bugs. In ISPRAS, a several-years effort within the Linux Driver Verification program/project has led to finding several dozens of problems in Linux device drivers. I even committed some fixes to these bugs to the kernel sources.

Well, I got distracted again. I've been planning a big blog post about this amazing technology for years, and I'll make one, but not now. Anyway, it was not me who devised how a program that checks reachability of lines in other programs works (it were two Cousuot-s), and I only fixed and improved an already released open-source tool, BLAST. I did create some novel things, but they were quite minor to my taste (it was just a new zero-overhead structure aliasing algorithm).

So, my last project in the Institute for System Programming was to prepare the tool to the Competition on Software Verification held at TACAS'12, which, in turn, is a part of ETAPS'12. There is a lot of domains where people write tools to solve the unsolvable (like the reachability problem) or the NP-hard (I wrote that you should try to solve this anyway). Such problems can not be universally solved, but a tool may solve them "better" than another, and it's interesting and useful to know who's the best.

A natural way to determine who is "better" is to measure the results of different tools on a common set of representative problems. This leads to specialized competitions among the tools that solve a specific problem. SMT-COMP for Satisfiability Module Theories logical solvers, and Answer-Set Programming System Competition are only two I know about, you can also name a couple of Chess and other formalized game tool competitions. I hope that SV-COMP will become one of them.

The Cousuots' approach is about 30 years old, and the technology beinhd BLAST itself is about 10 years old. However, BLAST contained a lot of improvements that made it apply to many programs, not just artificially created small "research-like" programs. That's why we chose it for finding bugs in Linux Drivers, and worked hard to improve it. Our improvement efforts are stored here, and are available under free software licenses, just like the original tools are.

But, being a less developed technology, it was eventually overtaken by more recent tools, such as CPAchecker, which provided a better ground for research experiments, and had a more developed theory. Still, the competition results demonstrated that the tool was still capable (and I hope that our improvements played a significant role in that). We got 5th place with 231 points, the 4th place being occupied by SATabs with 236. The final table was divided into two groups (200+ and the rest), and we belonged to the top tier.

What was funny that we even got a plaque for achieving the best results in "DeviceDrivers64" category... naturally. Too bad I wasn't there to see the ceremony :-(. Here's a photo of our team who contributed to the improvement of BLAST since version 2.5: 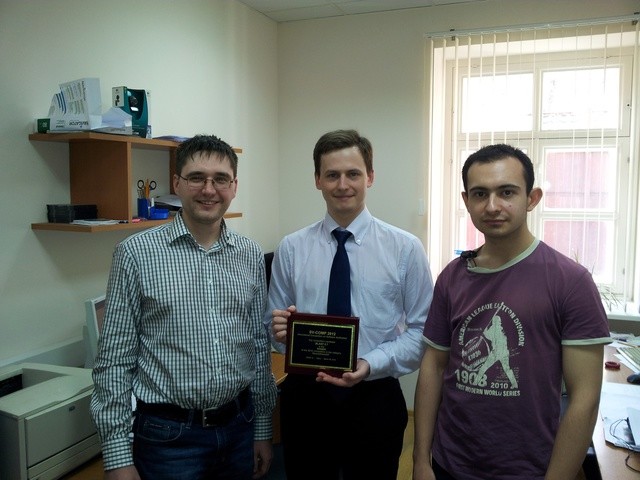 By the way, I already featured my former peers in a fictional interview about a "collaboration tool" by Penn&Paper's.

I'm sure that this project will eventually be superseded by more advanced software, but I still hope that I'll have time to have some fun with it as well.

A more detailed post about the verification technology pending, I'd like to thank my former peers for the great time I spent in the ISPRAS working on what I wished to do since I was a 7th-grader who first heard about the Halting problem. And I wish all the best to the Linux Driver Verification project as well.