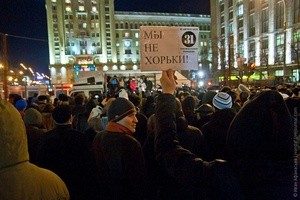 (photo by Ivan Afanasiev). The largest "Strategy 31" time-based protest I attended (January 2011). A protester features a sign with a protest logo.

A month ago I bumped into a protest manifestation in Moscow. It was one of a series of events "Different Russia" movement has been organizing since 2009. The interesting thing in this event is that it happens on 31st of any month consisting of enough days. This day was selected because the 31st clause in the Russian Constitution stated the freedom of assembly the movement believed was violated. Russian protest movement considered innovative to have a massive manifestation at a a specific date regardless of whether it was approved. For software engineers, however, doing such thing is not an epiphany of any kind. We call it "time-based releases", so I call the way of arranging such protests "time-based protests".

Time-based release is a pattern in software engineering which have taken the open-source world's mind over the latest five years. It means that the product team promises that each new release will be completed on a preliminarily established schedule no matter what new functionality or bug fixes it is about to contain. The release schedules are then arranged to ensure that a complete release cycle with such stages as feature proposal and selection, development, testing, and distribution completes by a given date. Release cycles often span from several months to years.

Many open-source projects switched from "when it's done" to time-based release algorithms. The most notable examples are Linux distributions named Fedora and Ubuntu, which followed GNOME project. Our ROSA Desktop Linux distribution does this as well. It's usually commented that time-based releases help to improve stability, to maintain a sustainable product delivery, and to strengthen the collaboration between developers and testers and users.

The key result here, however is that time-based release model involves a trade of innovation to an established process. No matter how many new, potentially innovative features we develop, we should release at this point, over. In the aforementioned Ubuntu this leads to criticism.

Why It Should Work Then

The most important reason to choose time-based release over "when it's done" is that this makes you think less and make less decisions. How is this important?

There are theories (I heard it at a conference, but failed to find any evidence of this at all, so let's consider it a fairy tale that is to teach us something useful :-) ) that the amount of decisions a person is to make per period of time is an expendable resource. Making each decision supposedly makes our body to spend some specific amino-acid; its supply renovates with time when you rest, or have a meal, but it never hurts to save some.

So, making decisions is hard, and making as few decisions as possible is a good thing rather than bad. Any open-source project has a lot to decide upon, and making one less decision is a small relief of sort anyway. That's why agreeing on a period to make a release in lets the project save some strength for other things.

Their aim was to protest against a collaboration with police forces, the necessity of such collaboration these manifestations was initially to protest against. At the meeting an interesting case of oppression happened: the police lifted the leaders of the "unapproved" protest group, and forcibly moved them into the approved location, saying, "This is where you should protest [against us]."

What "Strategy 31" has become 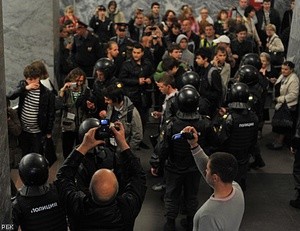 (photo by RBC). This is a typical representation of a latest manifestation on the 31st. A lot of wandering with cameras, some police, and only few protesters.

Do you want your software project to become like this?

However, one should never forget the ultimate mission, and never let keeping the schedule be put "in front of the cart". I feel that tying innovations into a time-based release schedule is much harder than doing the same into the release that has more freedom in picking the final date. It's not impossible, no, but is just harder. Mark Shuttleworth, the leader of Ubuntu, speaks about the same in his article on this matter.

I can't back this up these claims with statistical data about any software projects. What I did see, however, is how the energy of these "time-based protests" decayed over time. Many political commenters observed that the regularity became the only thing these protest could deliver. At first, it was enough, because the meetings were oppressed with an unusual degree of violence with no lawful reasons. After the government had relinquished the oppression directed at these particular meetings, and there even were two approved by government, the participants realized that the assemblies lost the nerve, and carried no message whatsoever anymore.

This is an important lesson for software engineers as well, especially for those that are involved in open-source projects , which consist of the volunteers just like public assemblies. Establishing a regular schedule is an important thing, but this is only the first step. If you commit to it too much, and sacrifice the nerve and the sense of the project to make it, you will en up like the time-based protests the "Different Russia" was arranging. At the manifestation a month ago, I saw dozens of police officers, a hundred of loiters who came to take a look at the meeting and photograph it on their iPads, and only 1 (one) actual protester.