Hooray! The Airbus finally brought me to the land where law is taken slightly more seriously than in Russia. With great responsibility, however, usually comes great power, and a lot of absolutely legal video streaming services are available in the U.S. Moreover, my corporate-sponsored temporary apartment has a large, like, 30-inch TV, and it would be a sin to just let it collect dust in silence.

No, I couldn't just watch cable TV! The very idea that I watch something on a predefined schedule is not appealing to me. I'd have to spend money on a TiVo or something that records TV shows anyway. And what about DVDs and feature movies? TV shows isn't the only thing I watch, by the way. And what about shows that are not airing? how to watch older seasons? No, TV is for the weak.

Sadly, I could only find how to watch TV shows in HD, not movies. I expand on this in a section about Amazon. So, TVs are certainly for the weak, but... I eventually solved the problem by buying a big-ass TV that has enough DRM to stream all kinds of HD moving pictures. Sorry, Linux fans.

Streaming has even some advantages compared to these filthy, illegal torrents. You can start watching an HD movie at once, rather than wait until its download is complete!

So the most rational idea is to stream movies from Internet via my desktop PC to the TV. Surprisingly, the hard thing was that I use Linux, and this was far from the usual "OMG settings are so complex in Lunupz, I can't do console!" whining.

The first thing to choose is the content provider. And that's where Linux users get into the ambush.

The thing is that the mission statement of GNU contradicts what content vendors are trying to achieve. Linux, or, more specifically, "GNU/Linux", because we're talking about operating system rather than the kernel here, is all about being open, allowing user to see what software is running and have full access to its contents. Content providers, however, insist that DRM—one of technologies to revoke control over content—is imposed onto end-users. This is why it is not easy to find Linux support in these matters.

The first service to try was Netflix. Actually, that million of dollars worked well: I only heard about Netflix form a Communications of the ACM article (as far as I recall it was this one) about the Netflix prize. No wonder I decided to try it first.

When I came to the U.S., I didn't have any personal computer at all. In Russia, we have an adage, "to come to Tula with one's own samovar". Tula was famous for its samovar-makers, and the adage mocks those who carry the specific items they possess to places that naturally have a great choice of such items. So no wonder I didn't bring my, like, 15-pound chassis here. Instead, I bought a 4-core i8 from Best Buy, but for the several first days all I had was Galaxy Note smartphone/tablet. Netflix installed smoothly from Google Play, I watched some TV shows there, and I thought I won't have any problems at my desktop PC.

I was very wrong. Netflix doesn't have a way to run under generic Linux distribution. Windows7, MAC—you go, Android—here you are, GNU/Linux—go fsck yourself. Seemingly reassuring was that it ran under ChromeOS, but that was only for proprietary Google's Chromebooks. Yes, even the new Samsung $250 ARM Chromebook. Recently, Google and Netflix managed to arrange a seamless delivery of video to the laptops, while it didn't work until the March'13. I tried it on mine, and it works! However, if you install ChromiumOS in a virtual machine, it also won't work (I tried.) A Netflix Chromium plugin also looked promising, but it's just a frontend to their web-site, and doesn't offer the playback capabilities to Chromium itself; there are a lot of angry reviews by Linux users, and a response to them is a caption to this section.) Here's a blog post with a more comprehensive overview.

Hulu, on the contrary, has a GNU/Linux application. However, very few of their movies were available in HD, and I was not interested in those that were. So I had to skip this service.

Yes, Amazon has a movie service as well. Marketing also worked here: I learned about this from IMDb, which was bought by Amazon years ago. And Amazon is the thing that finally worked but not without a plot twist.

The thing is that Amazon doesn't support GNU/Linux PCs for its HD movie content! Yep, that's right, check their list of compatible devices. You see a list of TiVo-s, Consoles, Smart TVs, and an iPad, but where's the PC? Nope, it's not there. Yet it works.

Not only this stuff requires Flash, but it requires special DRM capabilities in Flash, which relies on already deprecated HAL software maintainers started to remove from modern Linux distributions, but bring back just because of Amazon. If your distribution is released in 2012-2013, this may require additional actions you can google. ROSA Marathon 2012 plays Amazon Videos out of the box though, and in ROSA Fresh, you just need to urpmi hal from contrib repository.

That's right, when you pay for streaming an HD TV show, it just plays in your browser. It requires Flash, though. The list of compatible devices apparently means that if you "buy" a movie instead of renting it, you can only download it to one of the compatible devices rather than to your PC.

I used to think that it was a mistake of sorts, but the further research revealed that Amazon would probably love to stream all sorts of HD stuff to as wide variety of users as possible. This looks like a matter of what publishers allowed Amazon to do. They seemingly allow HD movies to tivoized and DRM-ready devices, and just don't care that much about TV shows. Streaming the movies I tried didn't work.

To connect a TV to your PC, you'll need some extra equipment. When I looked at the price of 25-feet HDMI cable at BestBuy, I was shocked: it cost more than my monitor! So I bought that 25-cable from Amazon for $14. You should already have Ethernet cable, but in case you don't you may buy it there as well, and, of course, you should have a good and fast connection.

The screenshots below are from the Linux distro that I use at home, namely ROSA Marathon 2012.

First, I connected the TV via cable, turned it on, and set the input to the corresponding slot. I'm not sure if it's necessary, but if never hurts to do this first.

Unfortunately, KDE settings (available via "Configure Your Desktop" → "Display and Monitor") thought that I don't have any other monitors: 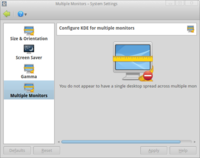 It remained this way even after I managed to configure it, so don't rely on it that much.

The second thing to try was the settings for my video card, nVidia GeForce GT 520. That's where I finally found managed to do this. This configuration tool will need to write to your /etc/X11/xorg.conf file, so make a backup first by copying it somewhere. Because of this very thing, you should run it under root (sudo won't work, use its KDE-specific counterpart):

Got to "X server Display Configuration" tab, and press "Detect Displays." Your connected TV should appear there. You could try TwinView, but you don't want to spread your desktop across two screens (it makes no sense), and TwinView sometimes limits your bigger monitor resolution to your TV resolution, which you don't want. However, TwinView doesn't require restarting X. 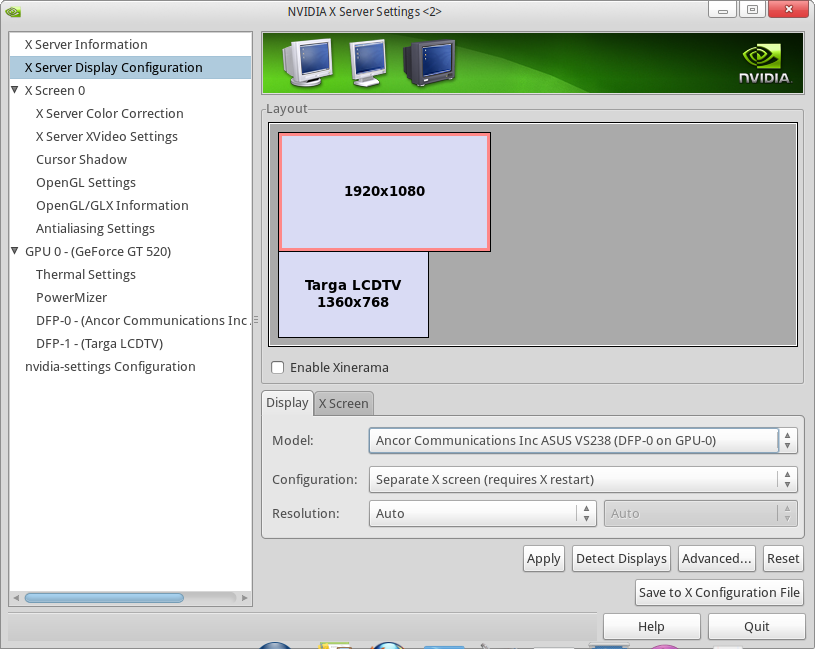 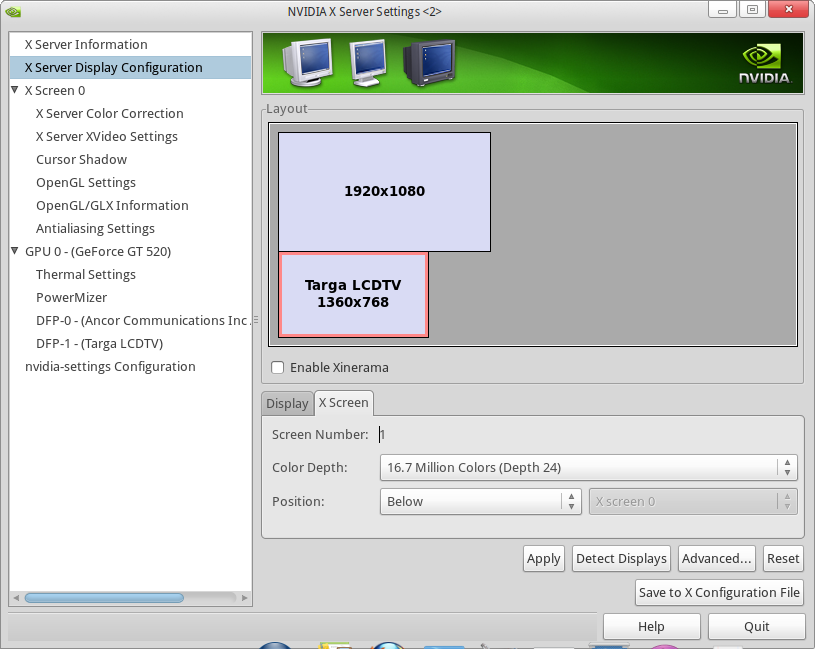 By the way, rosa-launcher (the Start Menu) doesn't work (it crashes) when several screens are set like that. The message has been sent to developers, I hope they'll fix it.

I also found out that the least intrusive is to place the TV display "Below" the main one. This means that the mouse will appear on the TV screen when you move it over the bottom edge.

Click "Save to X configuration File" (if you get an error here, you forgot to run as root with kdesu), and Quit. Restart your X server (or restart your PC), and there you go.

Now we should actually run something on that new screen. It's not that easy. There are different displays that are different X processes, and within one process live several "screens," which we have set up.

Remember, that videos play from your browser? So you should start a web browser on that another screen (this is not required if you use TwinView - just drag browser window to where your TV screen resides). Screens are set up nearly like displays, via the DISPLAY variable; the screen number follows the display number after a dot. I didn't manage to start a second Firefox window on that screen, unfortunately. But nowadays we do have a choice.

Now move your mouse beyond of the bottom edge of the screen, and start the movie you like. Pro tip: start browser as usual, log in to it, and only then re-start it on another screen to avoid excessive strain on your neck.

Start the movie... wait-wait-wait, why is the sound going from my PC speakers rather than from the TV itself?? Back to configuration. Open KDE desktop configuration tool, click on "Multimedia", select Phonon, and adjust the priority of the "Audio Playback" (not of any of subcategories, but of the category itself). 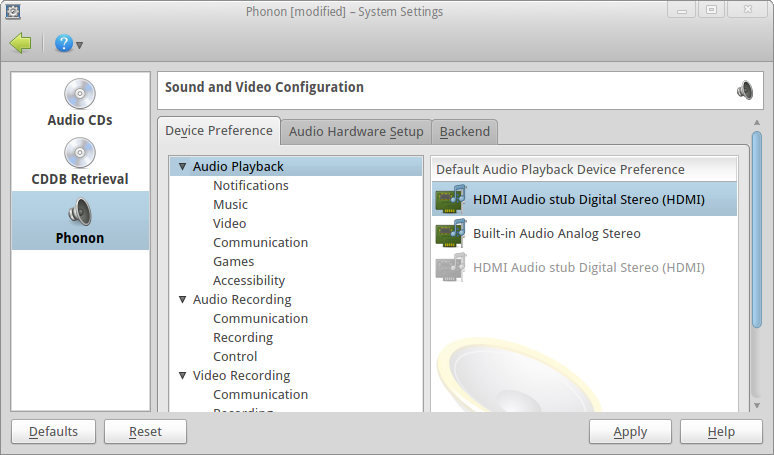 As usual with the sound, adjust mixer settings of HDMI device. Use alsamixer console command and unmute/volume-up everything there like crazy if the usual mixer doesn't give results: 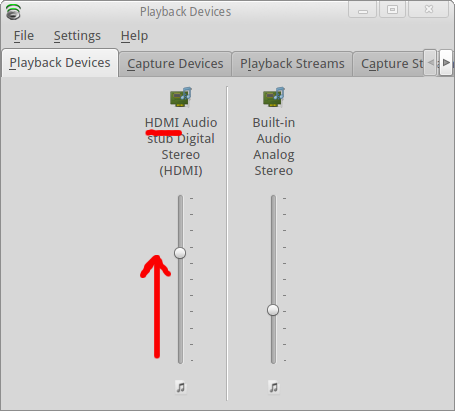 For me, sometimes, I had also to select another profile on "Audio Hardware Setup" tab. Now you're set. The sound should be re-routed to TV without restarting the browser, but, again, give it a try if it doesn't work.

Enjoy. Here's a proof that it works: 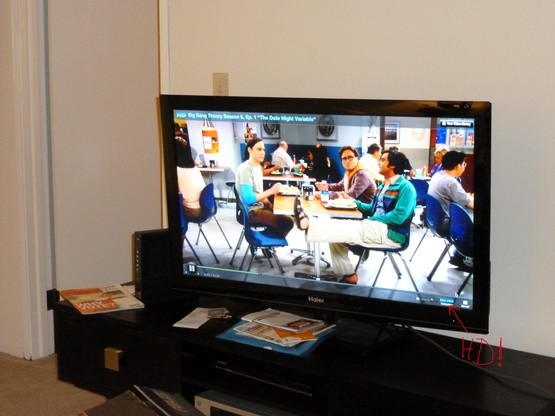 Internet connection is not used very intensively, and I'd be able to watch, like, three HD videos simultaneously:

That's how you fight your way through bugs, tricky settings, "X displays" (wtf? why do I need to worry about that?) Of course anybody would love to avoid all that. But that's basically the same thing that you have to select and tune things like medical insurance on your own, because you are, as with Linux, in the land of the free.