So I am on a trans-Atlantic flight onboard an Airbus A330.  It is a pretty large plane; each seat is accompanied with a computer referred to as "the Entertainment System" (big deal at the time).  The system offered games, movies, inflight information (the plane location plotted onto the world map), and flight progress details, which is kind of reassuring as the flight lasts for 10+ hours.)  A "killer feature" of this system was its USB port to charge your mobile phone (or to type this story, for instance.) Times were definitely different.

Not only did I learn that day what operating system that computer ran, but I also found out yet another example of a machine demonstrating such inherently human feelings as courage and hope.

Nothing prompted this at first. I casually opened inflight information and promptly fell asleep.  I woke up; there was a couple of movies worth watching, so I tried to launch them.  It didn't work.

"I am a programmer, aren't I," I thought, and started to click all the buttons on the remote control with purpose and determination.  None of that worked.  I tried to click the on-screen buttons; they worked properly, while their remote-control counterparts did not.  I concluded that the driver for the remote died somehow, and asked the stewardess to reboot my terminal.

As it started to reboot, I noticed a lot of familiar words.  It used a bootloader named RedBoot copyrighted by RedHat, and it obviously ran Linux kernel 1.59 or something.

However, right after "decompressing image," it showed, "decompression error: incorrect data check," and rebooted again.  The system did not boot far enough to start the GUI. 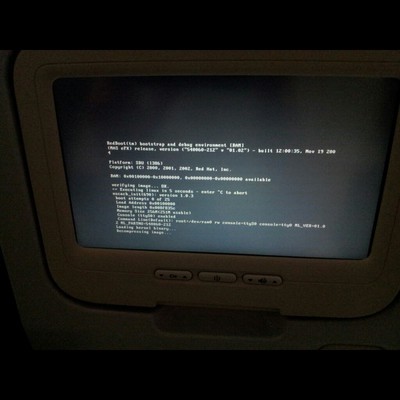 It also displayed a reboot counter. After twenty five reboots something should have happened, and I didn't know what. Curiosity took me over, and I stared at the screen, amused by that I know what the words on the screen meant.

After 25 reboots, the computer realized that there was something wrong with it, and ran the firmware update program.  It did not help.  He entered the same circle of pain again...and again.

As I watched the guy reboot over and over, I noticed that my curiosity is being replaced by different feelings.  I felt sympathy and compassion for that guy.  It kept trying and trying, and it kept failing and failing--as if it didn't even know what would happen next.

There are theories that as computer programs start to gain cognition, they would become acutely aware of their own limitations.  "I envy you humans for your unknowable boundaries," says a reddit bot that automatically handles pictures posted to reddit in "his" answer during the open interview (aka "AMA").  I don't know if these theories will have anything to do with reality; but they do not sound incoherent. And this little computer clearly had no awareness of his incapability to boot, and it kept crucifying himself.

Compassion was replace by sorrow. Having watched a hundred reboots and firmware updates, I lost all hope. "Why would we keep him alive?" I thought. "He'll just keep doing this being unaware that he's broken.  Why can't we just shut him down and end the series of reboots?  Do we humans even realize how painful each reboot could be," I thought, "maybe he wants to die already?" I tried to recall what people do when euthanasia is not an option. Morphine?  Even morphine can't relieve a computer's pain—though, none is allowed on an aircraft anyway.

I asked the flight attendant to shut it down at my seat to ease his pain.   "Oh, unfortunately it's impossible," she replied. "but we can move you to another place if you want though: we have some extra chairs available."

I suddenly realized I can't leave him.  To the other passengers and crew, it was just a malfunctioning computer to be rebooted, replaced, or ignored.  To me, however, it was a dying Tux  who fought for his survival against its own limitations.  I recalled how friends and relatives stay at the bed of a dying loved one, and imagined how they'll soon gather near the charger of a family robot who's about to leave for his silicon heaven after a long, deadly malfunctioning.

I sat by his side for the rest of the flight.

And he finally succeeded!   After six hours of effortless reboots, his RAM was no longer corrupt; his OS landed a working kernel and booted up!  The usual routine went on, the first-boot symlinks had been set up, the X11 system started, showing its tapestry with the well-known black-and-white embroidery.  I could launch one of the movies I wanted several hours ago, but I gave the Tux some rest instead.  He deserved it.

So I experienced this enlightening encounter with a machine who fought for his life, never lost hope, ignored what was believed to be his limitations, and did finally succeed in this struggle.   Not only did he demonstrate the determination only humans seemed to possess: the dying Tux also happened to have more faith in his own victory than the human beside him. 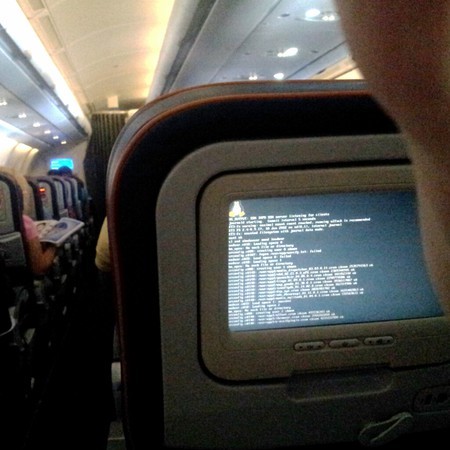 Oh my god! You hacked the airplane!!!!

Oh, I wish I could hack him to perform the surgery necessary to bring him back to life. I tried some shortcuts Like holding Ctrl+C when booting, but then I realized that it was just silly. It was as fruitless as applying acupuncture to a patient in coma thinking that this could bring him back to normal.