A couple of weeks ago I started a new project in ROSA. The project is a dynamic system that tracks health of our Linux distribution repository in real-time by watching the builds and repository status, and running external analyzers. This is a relatively small system that should end up with less than 50k LoC, so I could choose any language I wanted. I would choose Ruby, of course, but this time I had to raise the significance of social issues, and chose Python. I never wrote a single Python program before, but all my peers didn't want to learn Ruby, so I took this chance to learn a new language.

This is the logo of Python the programming language. Definitely, these aren't snakes, sure.

Python is named after Monty Python's flying Circus, as per wikipedia entry rather than after a non-venomous snake family. Snakes, however, are featured at the Python's logo, and Monty Pythons are not well known in Russia, so it's easier to associate snakes with Python language when it comes to computing.

To aid me in learning a new language, and to make it more fun, I needed an artifact that helps me. Due to my unhealthy devotion to shirts/ties, I thought of buying a tie with snakes painted on them. I didn't find one although I searched all shops in my district, including those that sell clothes for kids. I couldn't even find a tie made out of snake skin; while they're referenced in literature, they're either mythological or require the social connections I don't have to obtain one.

It wasn't until my colleague linked me this website when I found the way to make a snake out of my tire. Indeed, if I can't buy one, why can't I make one?

I started with a black tie I no longer liked. Time to revive it by turning it into a programmer-friendly snake! Here's a step-by-step guide, inspired by the one linked above. You'll need

Start with tying your favorite knot, and marking the place where it ends. Starting from that place and below, the two-dimensional tie will turn into a three-dimensional snake. Open the tie up making sure it won't fall apart (I had to re-knot the threads that were running through the yet-to-become Python manually—I didn't have any GIL to assist me!) I had to also open the bottom end of the tie, because it was detached from the upper part: 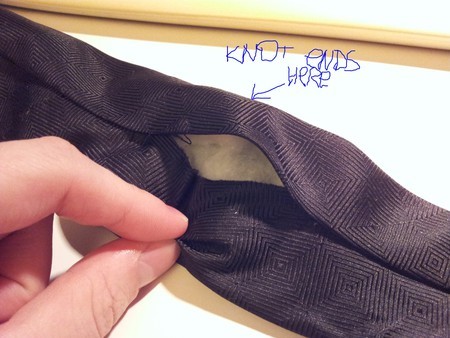 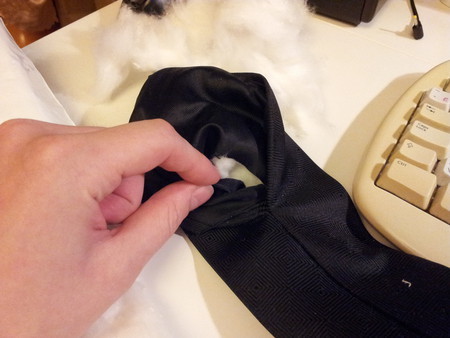 Start filling the tie with the cotton wool. To make the wool through the tie, you might need something long and stiff, I used a toothbrush. 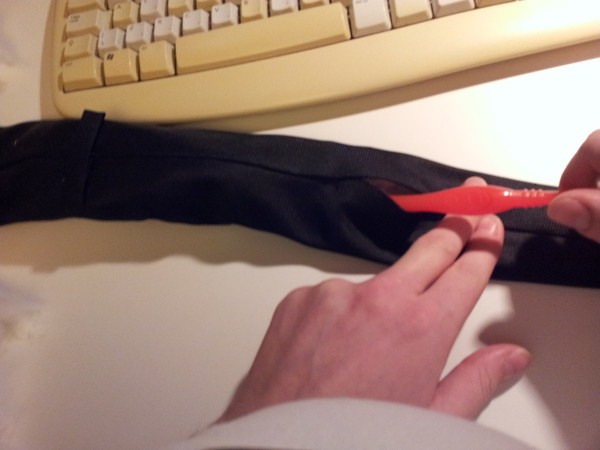 As you fill the tie, it may no longer keep the original shape. I used a pin to strengthen the lower end. To make the pin completely hidden, stick it into the inner half outwards, and pin the outer one onto it, hiding the pin itself in the fold. 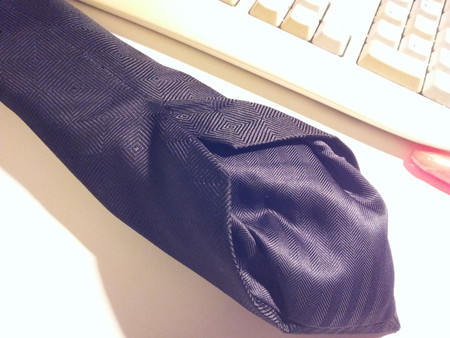 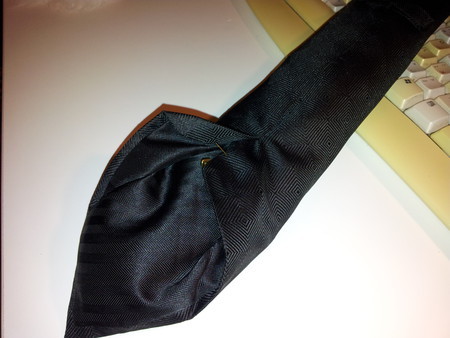 Do not fill it all the way to the knot point! Tie the knot first. Here's the Windsor knot I tied; look how you still have the access to the hole you made at the very beginning. Stuff the tie with more cotton wool. 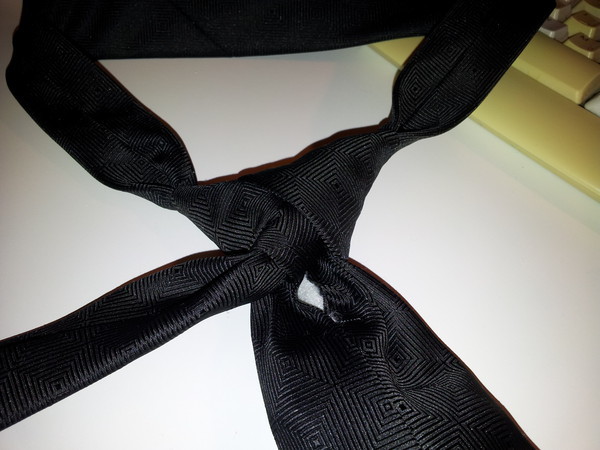 Now you can attach a tongue. A nice red split tongue is what makes your former tie a mighty snake rather than a boring worm. Cut it from the red cloth you prepared. I had to cut it several times before I managed to make a tongue good enough. Attach it with a small pin, sticking it as close as possible to the tip of the tie. The pin will be concealed when you look from the front side. 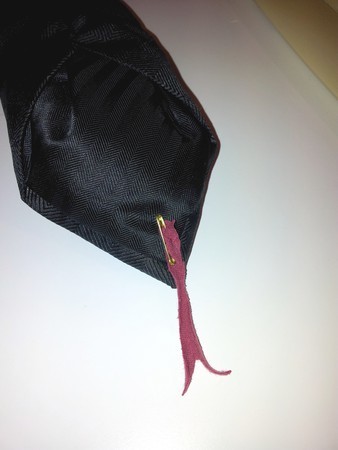 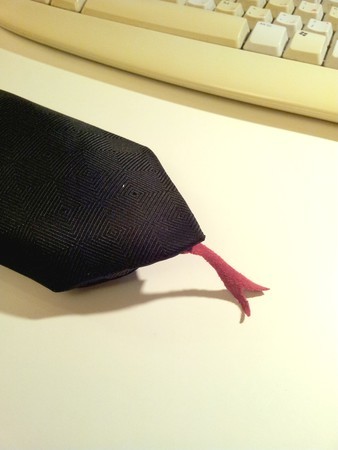 Now make eyes for your snake. I just painted with a pen on small pieces of paper. This is an easy part; you may experiment as much as you like; I found that the snake looks most crazy if the eyes are placed close to each other. I also felt that the color of the pupils should fit the color of the tie itself, so I used black.

After you found the proper shape and place for the eyes, you should attach them. Sticking a nail into your future friend's eye is disgusting (and the result wouldn't look real enough), so you'd rather use glue. I didn't have any glue, so I used one-sided sticky tape a body patch was made of, and rolled it up to make it "two-sided". 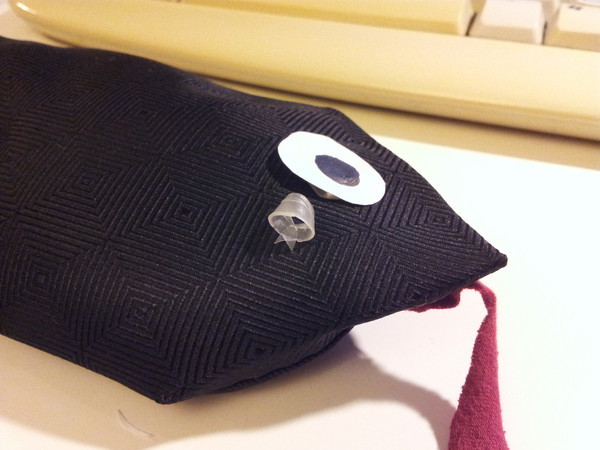 Your new friend is ready. Make sure it stays away from mice! 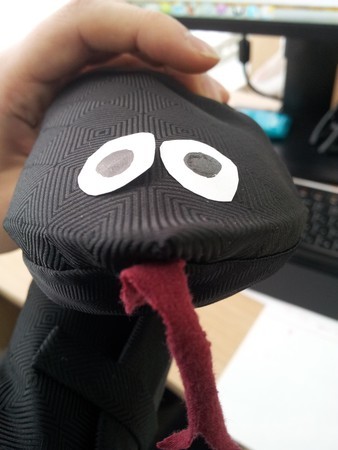 If you're brave enough, you may even go to work wearing it. 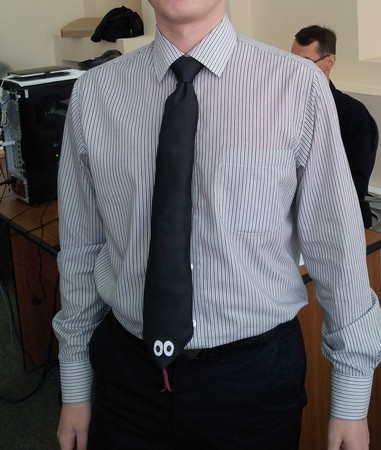 I hope I won't get fired because of that. This would be programming language discrimination anyway!

So that's how you—or, more likely, your kid—can assemble a Python tie from the old useless things you find at home. I hope that programming Python itself will be different than putting the same old stuff together—and more fun.